Every year the U.S. News and World Report ranks diets in many categories, ranging from Best Overall Diet, to Best Weight Loss Diet, to Best Diabetes Diet, and so on. For some reason, the Zone Diet always gets ranked somewhere between the Drinking Man’s diet and Grapefruit diet. What did I possibly do to so thoroughly irritate the editors of this magazine?

The Aim of the Zone Diet is Weight Loss – False!

Let’s start with the basic premise that the U.S. News and World Report believes the aim of the Zone Diet is weight loss. I guess they’ve never read any of my books.

The aim of the Zone Diet is the control of inflammation. In other words, you must keep inflammation in a zone. Yes: If you control inflammation you will lose weight, because the driving force for weight gain is insulin resistance caused by inflammation.

Let’s look deeper into their criticism of the Zone Diet, using their own words. In the theory section, they state, “The key to weight loss is achieving proper hormonal balance and keeping your blood sugar stable.” Of course it is. They go on to say the key feature of the Zone Diet is to ensure “You can make sure your insulin and other inflammation-promoting hormones stay in the zone.” I stand accused.

Let’s go on to the U.S. News and World Report section on how the Zone Diet works. At least they correctly state the recommended daily calorie intake for the average American following the Zone Diet is between 1,200 and 1,500 calories. Then they complain that Americans need more calories than that!

Don’t we have an obesity and diabetes epidemic in this country?

If you have excess body fat, then you don’t need to add more calories on a daily basis if the restricted number of calories you are consuming are adequate in protein (to maintain muscle mass), carbohydrate (to stabilize blood sugar levels for the brain), and have a balanced protein-to-carbohydrate ratio to accelerate the release of stored body fat by reducing insulin resistance.

What’s my definition of having excess body fat? Not being able to see your abdominal muscles in the mirror. That means about 99% of Americans have excess body fat.

If you are able reduce insulin without hunger or fatigue, then any extra energy you need will come from your own stored body fat. As I pointed out in my 1997 book, Mastering the Zone, once you can begin to see your abdominal muscles, then you start adding back additional fat to your diet.

Most diets begin with how many calories you need – or even worse – by stating that calories don’t count. Of course they count.

The Zone Diet takes a very different approach to how many calories you need on a daily basis. The starting point is how much protein you need to maintain your muscle mass. That will be about 90 grams of protein for an average female and 110 grams for an average male. Anything less would be a protein-deficient diet. You just spread that amount of protein evenly throughout the day.

Finally, you add enough fat calories at each meal to make food taste better without restricting fat loss from your adipose tissue.

All You Need is A Hand, an Eye, and a Watch – Or a Mobile Phone

The U.S. News and World Report also correctly says, “The only measuring tools you need are your hand and your eye.” They are correct on that point.

They go on to state, “divide your plate into three equal sections. Put a low-fat protein such as chicken or fish that can fit in the palm of your hand, which for most women equates to 3 ounces; 4 ounces for men. Then fill the other two sections of the plate with colorful carbs (fresh fruit or steamed vegetables). Top it off with a dash of healthy fat.”

Call me crazy, but isn’t that the advice of every dietitian in the world? It is true some hands are bigger than others. Those with the bigger hands (usually males) get to have a little more protein at each meal. Unfortunately, they forgot to add the third tool: your watch. If you have balanced your last meal correctly, then you will not be hungry or fatigued for the next five hours. I guess they were running out of space in their publication.

Minced Words or Minced Vegetables – the Choice is Yours

The editors at U.S. News and World Report are doing such a good job in describing the Zone Diet; I will just let them continue. They say, “no food is off limits.” That sounds pretty reasonable to me.

Then they go on to say, “Optimal protein choices include skinless chicken, turkey, fish, egg whites, low-fat dairy, tofu, and soy meat substitutes.” Pretty radical thinking on my part making me feel like the Bernie Sanders of nutrition. Relative to carbohydrates on the Zone Diet they state, “Your best bets are vegetables, fruit, and oatmeal and barley. Stay away from pasta, bread, bagels, cereals, and potatoes.” I thought all of the epidemiological research from Harvard Medical School for last 25 years has said the same things. I had better tell Harvard they are wrong.

Now, if you do all of those crazy things described by the U.S. News and World Report, you will end up with about 40% of your calories at that meal coming from carbohydrates, about 30% from low-fat protein, and 30% from the dash of fat. I should also point out that the total calories for a Zone meal adds up to about 400 calories. Even with basic math skills, you could tally that three such Zone meals would come to 1,200 calories per day.

Let’s See How the Zone Diet Stacks Up

Here’s what 1,200 calories per day looks like on the Zone Diet.

The first thing that strikes you should be that this is a lot of food.

Second, it looks a similar to the Mediterranean diet without the bread, pasta, rice, and potatoes.

Third, why isn’t this considered the healthiest diet known to mankind?

According to U.S. News and World Report, the best overall diet is the DASH diet. That’s an acronym for Dietary Approaches to Stop Hypertension. So how does the DASH diet compare to the Zone Diet? Let’s look at the percentage of calories from different macronutrients. 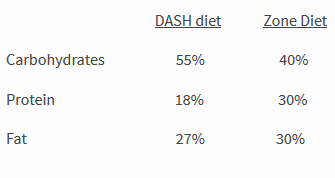 Let’s recalculate these two diets on the absolute amounts of carbohydrate, protein, and fat in grams you would be consuming on a daily basis.

Now your perception should begin to change.

The #1 best diet according to the U.S. News and World Report contains a lot more carbohydrates and more fat than the Zone Diet. Why? The DASH diet recommends seven to eight servings of grains every day.

The real benefit in following the Zone Diet is that you will never be hungry or fatigued. Why? You are stabilizing blood sugar levels. This may explain why dietary guidelines from the Joslin Diabetes Research Center at Harvard Medical School for treating diabetes were essentially identical to the Zone Diet.

Additionally, studies at Harvard Medical School demonstrated that eating Zone meals reduced hunger and inflammation compared to meals of equal number of calories, but with a similar calorie composition of the DASH diet. Yet the DASH diet is rated the #1 best diet and the Zone Diet is rated #25.

Am I living in an alternate universe? (Don’t answer that.)

Taking a Shot at Diabetes

I should also point out that the Zone Diet was also rated #33 for diabetes. Maybe someone should also tell the Joslin Diabetes Center to get their act together.

At least U.S. News and World Report was correct in stating, “Zone dieters were shown to have the greatest reduction in lowering inflammation.” That’s the reason I developed the Zone Diet more than 25 years ago – to keep inflammation in a zone that is not too high, but not too low. I guess I did OK on that point.

I can only hope that next year the U.S. News and World Report will have a category for the best “anti-inflammatory diets.” Maybe the Zone Diet can make into the top 10, although I am not sure whom the other nine diets might be.