The recent article by Smith et al in the 2015 issue of the American Journal of Clinical Nutrition tried to answer the question of primary prevention of weight gain (1). This is actually a germane question since most diet studies focus on overweight/obese individuals losing weight after years of gaining weight.  Thus this new article endeavors to determine primary prevention strategies against developing heart disease, as opposed to secondary prevention strategies to try to prevent another heart attack.

The road to obesity is not a rapid one.  Weight gain in adults is usually 1 lb./year (0.45 kg/year).  Simple-minded thinking would suggest just reducing calorie intake would be the answer.  After all, you should only need to reduce your calorie intake by less than 10 calories per day to theoretically prevent the gain of 1 pound of fat per year.  However, a previous study by Harvard Medical School has indicated it is the combination of foods, not simply their calorie content that determines long-term weight gain (2).

So after a lot of statistical hand-waving, the article concludes that to prevent weight gain, one should embark on a dietary program to consume more low-fat protein and low-glycemic-load carbohydrates (i.e., non-starchy vegetables and fruits like berries).  A final recommendation is to avoid eating low-fat meals since doing so tends to make a person overcompensate by eating more carbohydrates.

As one of authors of the study stated, "Our study adds to growing new research that counting calories is not the most effective strategy for long-term weight management and prevention.  Some foods help prevent weight gain, other make it worse."

Perhaps these Harvard researchers may have overlooked The Zone, even though it was a #1 New York Times bestseller and one of the best-selling diet books of all time.  Furthermore, I provided precise instructions in The Zone on the macronutrient balance of such a diet needed to control hormonal responses (3).  Although it is a bell-shaped curve, the center point is at 40% low-glycemic-load carbohydrates, 30% low-fat protein and 30% fat as shown below: 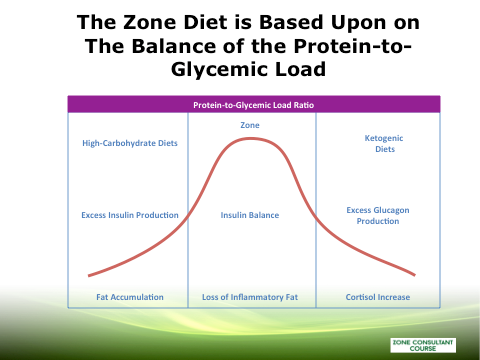 Ignorance of my dietary concepts by Harvard is probably not the case either, since one of the authors of the most recent study did clinical experiments in 1999 to demonstrate that a single Zone meal of equal calories could dramatically alter hormonal responses compared to higher-carbohydrate-containing meals (4).

Sometimes a picture is worth a thousand words, so here is the summation of hormonal changes that these Harvard investigators observed with a single meal. 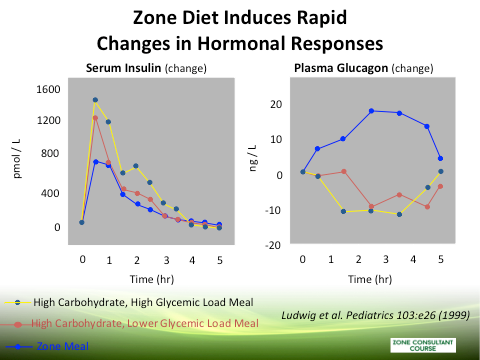 While I am the first to admit that science moves slowly, it is nice to see that Harvard is finally beginning to admit that maybe a "calorie is not a calorie," and that the hormonal consequences of each meal should be considered if we want to prevent weight gain and the co-morbid chronic disease conditions (diabetes, heart disease, and cancer) that come with increasing weight gain.  Maybe some day in the future, they will also mention that the reason that weight gain is associated with these chronic diseases is because of increased inflammation.  I think I also wrote about that subject more than a decade ago (5).  Maybe they might mention my book the next time.

February is American Heart Month. This week we sat with Dr. Sears to ask his thoughts on various topics pertaining to he...

Beyond Cholesterol: The Real Link Between Diet and Heart Disease

One of the best ways to live longer is to reduce your likelihood of dying from a heart attack since it continues to be t...

What Is An Effective Dose of Omega-3 Fatty Acids?

The November 10, 2018 issue of the New England Journal of Medicine contained two articles on the use of omega-3 fatty ac...