Your Cholesterol Cure May Be Madness

This week the American Heart Association announced a doubling down on its bet on cholesterol and heart disease.  It certainly wasn’t because there was a sudden epidemic of heart disease, because death rates have been falling since 1970 (20 years before statins were introduced).  Nor has there been any new clinical data showing the benefits of lowering cholesterol levels. Although for the last 20 years the use of statins has been said to be the end of the scourge of heart disease, it still remains the number-one killer of Americans.

Furthermore, these newest guidelines essentially recommend that not only should more Americans be put on statins, but they should also start at the highest dose possible.  In actuality, this “dose” is where the toxic effects begin to appear.  What are the toxic effects?  They include muscle weakness, reduction in cardiovascular fitness, increased diabetes, and memory loss.  Whatever happened to the Hippocratic oath of doing the patient no harm?

All of this might be justified if there were any indication that cholesterol is the driving force behind heart disease.  Unfortunately, the facts simply don’t support the hype. Remember, before statins arrived in 1994, saturated fat was the villain in heart disease, not cholesterol (1).  Yet in 2010, Harvard Medical School published epidemiological studies that made the connection between saturated fat and heart disease very tenuous at best (2).

So what if cholesterol is not the cause of heart disease?

Actually, there is another drug that also reduces mortality from heart disease, yet doesn’t lower cholesterol.  It’s called an aspirin.  What aspirin does do is to reduce inflammation.

The inflammation versus cholesterol battle for what causes heart disease has been raging for decades.  What gave the cholesterol boys the upper hand was it is easy to measure blood cholesterol.  With the advent of statins, it was simple for doctors to repeat the drug company mantra to their patients, “If your cholesterol levels are high, you are going to die”.  Great marketing, but poor science.

Just to illustrate the importance of reducing inflammation versus LDL cholesterol on mortality from heart disease, we can look at the heart disease mortality rates in 2004 both Japan and the United States (3).  The Japanese had a death rate from heart disease that was 71% lower than Americans, although their LDL cholesterol levels were virtually the same.  What was different between the two populations were their levels of inflammation as measured by the AA/EPA ratio.  The Japanese levels of inflammation were 76% lower than Americans.  These changes are shown in the following figure.

Figure 1.  Per Cent Differences Between Japanese and Americans 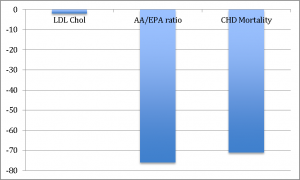 Even without advanced statistics, I think you can see there is a much better correlation between the reduction of the AA/EPA ratio between the Japanese and Americans relative to the reduction in mortality from heart disease than there is between differences in LDL cholesterol levels in Japanese and Americans relative to mortality from heart disease.

The only way to explain this new madness for lowering cholesterol is it is a last-gasp effort of the cardiologists, who have spent their entire careers on the cholesterol bandwagon and will defend their faith to the death.  Unfortunately, it may be their patients who will have to pay the ultimate price for not being told the real enemy is inflammation.