What Are the Real Differences Between EPA and DHA?

When you read anything about fish oil, the acronyms EPA and DHA always go together. But what do they really mean, and what’s the difference between them? The reality is that the two key omega-3 fatty acids (EPA and DHA found in fish oil) do a lot of different things, and as a result the benefits of EPA and DHA are often very different. That’s why you need them both. But as to why, let me go into more detail.

This essentially chokes off the supply of AA necessary for the production of pro-inflammatory eicosanoids (prostaglandins, thromboxanes, leukotrienes, etc.)

DHA is not an inhibitor of this enzyme because it can’t fit into the active catalytic site of the enzyme due to its larger spatial size. As an additional insurance policy, EPA also competes with AA for the enzyme phospholipase A2 necessary to release AA from the membrane phospholipids (where it is stored). Inhibition of this enzyme is the mechanism of action used by corticosteroids. If you have adequate levels of EPA to compete with AA (i.e. a low AA/EPA ratio), you can realize many of the benefits of corticosteroids but without their side effects. That’s because if you don’t release AA from the cell membrane, you can’t make inflammatory eicosanoids.

Because of its increased spatial dimensions, DHA is not a good competitor of phospholipase A2 relative to EPA. On the other hand, EPA and AA are very similar spatially so they are in constant competition for the phospholipase A2 enzyme, just as both fatty acids are in constant competition for the delta-5 desaturase enzyme. This is why measuring the AA/EPA ratio is such a powerful predictor of the state of cellular inflammation in your body.

The various enzymes (COX and LOX) that make inflammatory eicosanoids able to accommodate both AA and EPA, but again due to the greater spatial size of DHA, these enzymes will have difficulty-converting DHA into eicosanoids. This makes DHA a poor substrate for these key inflammatory enzymes. Thus DHA again has little effect on cellular inflammation, whereas EPA can have a powerful impact.

Finally, it is often assumed since there are not high levels of EPA in the brain, that it is not important for neurological function. Actually, it is key for reducing neuro-inflammation by competing against AA for access to the same enzymes needed to produce inflammatory eicosanoids. However, once EPA enters into the brain, it is rapidly oxidized.This is not the case with DHA.

The only way to control cellular inflammation in the brain is to maintain high levels of EPA in the blood. This is why all the work on depression, ADHD, brain trauma, etc., has demonstrated that EPA is superior to DHA.

At this point, you might think that DHA is useless. Just the opposite, because DHA can do a lot of different things than EPA and some of them are even better.

First is in the area of omega-6 fatty acid metabolism. Whereas EPA is the inhibitor of the enzyme (D5D) that directly produces AA, DHA is an inhibitor of another key enzyme, delta-6-desaturase (D6D), that produces the first metabolite from linoleic acid known as gamma linolenic acid or GLA.

However, this is not exactly an advantage. Even though reduction of GLA will eventually decrease AA production, it also has the more immediate effect of reducing the production of the next metabolite known as dihomo gamma linolenic acid or DGLA. This can be a disaster as a great number of powerful anti-inflammatory eicosanoids are derived from DGLA. This is why if you use high-dose DHA, it is essential to add back trace amounts of GLA to maintain sufficient levels of DGLA to continue to make anti-inflammatory eicosanoids.

In my opinion, the key benefit of DHA lies in its unique spatial characteristics. As mentioned earlier, the extra double bonds and length of DHA compared to EPA means it takes up a lot more space in the membrane. Although this increase in spatial volume makes DHA a poor substrate for phospholipase A2 as well as the COX and LOX enzymes, it does a great job of making membranes (especially those in the brain) a lot more fluid as the DHA sweeps out a much greater volume in the membrane than EPA.

This increase in membrane fluidity is critical for synaptic vesicles and the retina of the eye because it allows receptors to rotate more effectively, thus increasing the transmission of signals from the surface of the membrane to the interior of the nerve cells. This is why DHA is a critical component of these parts of the nerves. On the other hand, the myelin membrane is essentially an insulator so that relatively little DHA is found in that part of the membrane.

This constant sweeping motion of DHA also causes the breakup of lipid rafts in membranes. Disruption of these islands of relatively solid lipids makes it more difficult for cancer cells to continue to survive and more difficult for inflammatory cytokines to initiate the signaling responses to turn on inflammatory genes. In addition, these greater spatial characteristics of DHA increase the size of LDL particles to a greater extent compared to EPA.

As a result DHA helps reduce the entry of these enlarged LDL particles into the muscle cells that line the artery, thus reducing the likelihood of developing atherosclerotic lesions. Thus the increased spatial territory swept out by DHA is good news for making certain areas of membranes more fluid or lipoprotein particles larger, even though it reduces the benefits of DHA in competing with AA for key enzymes important in the development of cellular inflammation.

Common Effects for Both EPA and DHA

Not surprisingly, there are some areas in which both EPA and DHA appear to be equally beneficial. For example, both are equally effective in reducing triglyceride levels. This is probably due to the relatively equivalent activation of the gene transcription factor (PPAR alpha) that causes the enhanced synthesis of the enzymes that oxidize fats in lipoprotein particles.

There is also apparently equal activation of the anti-inflammatory gene transcription factor PPAR-gamma. Both seem to be equally effective in making powerful anti-inflammatory eicosanoids known as resolvins. Finally, although both have no effect on total cholesterol levels, DHA can increase the size of LDL particle to a greater extent than EPA can.

EPA and DHA do different things, so you need them both.

If your goal is reducing cellular inflammation, then you probably need more EPA than DHA. How much more? The most effective way to find out how much fish oil you need is to test your blood. Our Cellular Inflammation Test Kit allows you to test your personal levels at home. You will receive a detailed report with your AA and EPA levels, as well as your Cellular Inflammation Score, and personalized wellness recommendations. Then, you will never need to guess how much fish oil you should take.

Already know how much fish oil to take? Dr. Sears' OmegaRx Fish Oil is the best way to get high levels of both EPA and DHA. 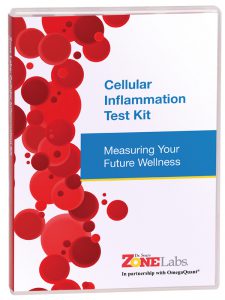 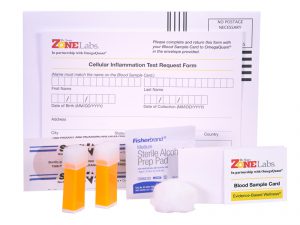