What is Cellular Inflammation?

People (including virtually all physicians) are constantly confused what cellular inflammation is. So I decided to take the opportunity to explain the concept in more detail.

There are several extracellular events through which NF-κB can be activated by distinct mechanisms. These include microbial invasion recognized by toll-like receptors (TLR), generation of reactive oxygen species (ROS), cellular generation of inflammatory eicosanoids, and interaction with inflammatory cytokines via defined cell surface receptors. We also know that several of these initiating events are modulated by dietary factors. This also means that appropriate use of the diet can either turn on or turn off the activation of NF-κB. This new knowledge is the foundation of anti-inflammatory nutrition (1-3).

Although the innate immune system is exceptionally complex, it can be illustrated in a relatively simple diagram as shown below in Figure 1. 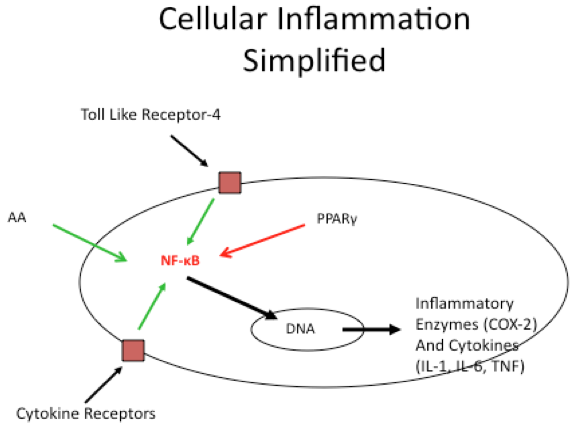 Essential fatty acids are the most powerful modulators of NF-κB. In particular, the omega-6 fatty acid arachidonic acid (AA) activates NF-κB, whereas the omega-3 fatty acid eicosapentaenoic acid (EPA) does not (4). Recent work suggests that a subgroup of eicosanoids known as leukotrienes that are derived from AA may play a significant factor in NF-κB activation (5,6)

Extracellular inflammatory cytokines can also activate NF-κB by their interaction with specific receptors on the cell surface. The primary cytokine that activates NF-κB is tumor necrosis factor (TNF) (7). Toll-like receptors (TLR) are another starting point for the activation of NF-κB. In particular, TLR-4 is sensitive to dietary saturated fatty acids (8). The binding of saturated fatty acids to TLR-4 can be inhibited by omega-3 fatty acids such as EPA. Finally ROS either induced by ionizing radiation or by excess free radical formation are additional activators of NF-κB (9).

Anti-inflammatory nutrition is based on the ability of certain nutrients to reduce the activation of NF-κB.

The most effective way to lower the activation of NF-κB is to reduce the levels of AA in the target cell membrane thus reducing the formation of leukotrienes that can activate NF-κB. Having the patient follow an anti-inflammatory diet, such as the Zone Diet coupled with the simultaneous lowering omega-6 fatty acid intake are the primary dietary strategies to accomplish this goal (1-3).

Another effective dietary approach (and often easier for the patient to comply with) is the dietary supplementation with adequate levels of high-dose fish oil rich in omega-3 fatty acids, such as EPA and DHA. These omega-3 fatty acids taken at high enough levels will lower AA levels and increase EPA levels. This change of the AA/EPA ratio in the cell membrane will reduce the likelihood of the formation of inflammatory leukotrienes that can activate NF-κB. This is because leukotrienes derived from AA are pro-inflammatory, whereas those from EPA are non-inflammatory. The increased intake of omega-3 fatty acids is also a dietary approach that can activate the anti-inflammatory gene transcription factor PPAR-γ (10-12), decrease the formation of ROS (13) and decrease the binding of saturated fatty acids to TLR-4 (14). This illustrates the multi-functional roles that omega-3 fatty acids have in controlling cellular inflammation.

A third dietary approach is the adequate intake of dietary polyphenols. These are compounds that give fruits and vegetables their color. At high levels they are powerful anti-oxidants to reduce the generation of ROS (15). They can also inhibit the activation of NF-κB (16).

Finally, the least effective dietary strategy (but still useful) is the reduction of dietary saturated fat intake. This is because saturated fatty acids will cause the activation of the TLR-4 receptor in the cell membrane (8,14).

Since cellular inflammation is confined to the cell itself, there are few blood markers that can be used to directly measure the levels of systemic cellular inflammation in a cell. However, the AA/EPA ratio in the blood appears to be a precise and reproducible marker of the levels of the same ratio of these essential fatty acids in the cell membrane.

The most commonly used diagnostic marker of inflammation is C-reactive protein (CRP). Unlike the AA/EPA ratio, CRP is a very distant downstream marker of past NF-κB activation. This is because one of inflammatory mediators expressed in the target cell is IL-6. It must eventually reach a high enough level in the blood to eventually interact with the liver or the fat cells to produce CRP. This makes CRP a more long-lived marker in the blood stream compared to the primary inflammatory gene products (IL-1, IL-6, TNF, and COX-2) released after the activation of NF-κB. As a consequence, CRP is easier to measure than the most immediate inflammatory products generated by NF-κB activation. However, easier doesn’t necessarily translate into better. In fact, an increase AA/EPA ratio in the target cell membrane often precedes any increase of C-reactive protein by several years. An elevated AA/EPA ratio indicates that NF-κB is at the tipping point and the cell is primed for increased genetic expression of a wide variety of inflammatory mediators. The measurement of CRP indicates that NF-κB has been activated for a considerable period of time and that cellular inflammation is now causing systemic damage.

I believe the future of medicine lies in the control of cellular inflammation. This is most effectively accomplished by the constant application of anti-inflammatory nutrition. The success of such dietary interventions can be measured clinically by the reduction of the AA/EPA ratio in the blood.

Now that the Covid-19 epidemic seems to be slowing down, we must contend with the other epidemic that shows no signs of ...

Cocoa Benefits Q and A

Dr. Sears answers some of the top questions we receive about our new Cocoa Polyphenols.

Polyphenols: Key Features to Look at When Supplementing

This week we are introducing the newest members of our polyphenol line  CacaoRx and CacaoRx Plus. In this blog Dr. Sears...