Why Does the FDA Exist in the First Place?

Recently the Advisory Committee to the FDA recommended the approval of two new drugs (both are PCSK9 inhibitors that prevent the internalization of LDL receptors) to lower LDL cholesterol. Now the FDA has a chance to actually practice its real mandate, which is to protect the American public, not to generate new revenues for the drug companies.

Here are some very good reasons why a positive decision by the FDA to grant approval to these new drugs would represent a massive gamble for the American public.

What’s the goal?
The real target of any cardiovascular drug is to reduce heart disease. What’s the data on these drugs? There isn’t any (1,2). A reduction in a risk factor (i.e. LDL reduction) is not treating a disease. There are hundreds of known risk factors for heart disease (I personally like lowering inflammation as my favorite) besides elevated LDL cholesterol levels. At least the statins had some positive data in exceptionally high-risk male patients (but not female subjects) with existing heart disease that there was some benefit (3). However, in subsequent trials using overall mortality as an end point, the statins turn out to be rather pathetic drugs (4).

But statin defenders love to point out that they saved millions from death. Unfortunately, the data from the National Heart Lung and Blood Institute don’t back this up as shown in the following figure.

From 1950 to 1970 the death rate from heart disease was high. Then it started to drop in a straight-line fashion. It certainly wasn’t due to statins since they were not introduced until 1994. In fact, I am very hard pressed to see any change in the rate of decline. What could possibly explain such a dramatic reduction in mortality if it wasn’t the introduction of statins? How about starting with the Surgeon General’s Report in 1964 to stop smoking as shown in the graph below? 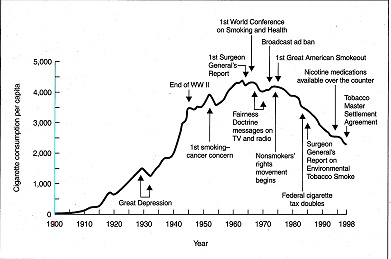 Heart disease was a rare disease at the turn of the century. It was only in 1920 that rates began to rise as shown in the figure below from the Centers of Disease Control. Unfortunately, the CDC didn’t separate classic coronary heart disease (CHD) from other diseases, such rheumatic fever, until 1952; but it appeared that CHD peaked in 1968, whereas stroke had been decreasing since 1900. 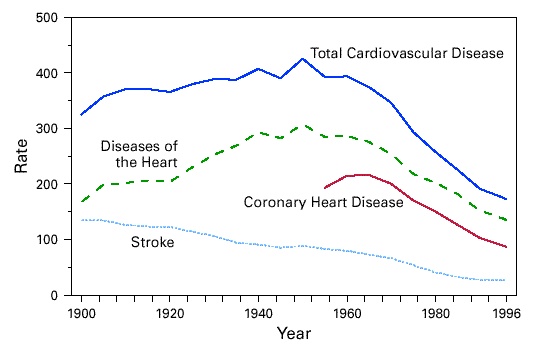 I don’t think you need a degree in statistics to see the rise and drop-off in heart disease mortality seems to be more highly correlated with changes in smoking than the introduction of statins.

Do No Harm
These new drugs also have known neurocognitive problems (1,2). If people don’t have existing heart disease, then why treat them with new drugs that have other problems, especially cognitive ones? Likewise, no one seems to be concerned by the demonstrated ability of statins to increase diabetes by 9% (12). Since the best estimate is that you have to treat 200 people with statins for five years to prevent one heart attack, this also means that 18 of those 200 (9%) will likely develop diabetes. Not a very good trade-off.

Follow the Money Trail
There are hundreds of billions of easy sales with these new drugs. Who doesn’t want the newest of the new? But what if they don’t work according to the results of the 27,000-person trial to be completed in 2017? Will the drug companies return their profits to the insurance companies who paid for the drugs? Highly unlikely unless the FDA tells them to wait before selling an unproven drug to treat heart disease.