Olive oil has been prized for thousands of years for its health benefits. As to why remains a more open question.

As a source of polyphenols, extra virgin olive oil is relatively low compared to berries and other sources of polyphenols like unrefined cocoa powder, as shown below: 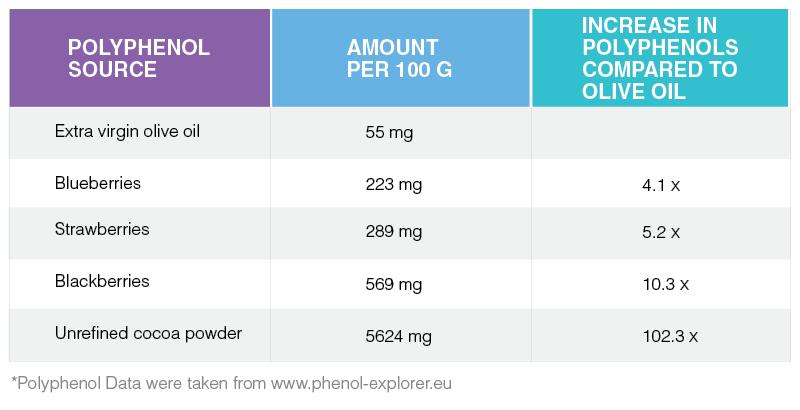 A little terminology is always helpful. A polyphenol is defined as containing two or more phenyl groups in a molecule. A phenolic compound has only one. Furthermore, most polyphenols are composed of polymers that are not absorbed, whereas a phenolic compound contains only monomers easily absorbed. There is nothing magical about a phenol group per se since benzene has a single phenyl group, and no one touts the health benefits of consuming benzene.

It is the structure of the phenolic compounds that make extra virgin olive oil so unique. Here they are shown below:

The first two compounds are tyrosol and hydroxy-tyrosol which are potent anti-oxidative compounds (1,2). The third structure is oleocanthal which has anti-inflammatory properties (3). To be correctly termed as a polyphenol means the compound must contain at least two phenyl groups, and none of the active compounds in extra virgin olive oil meets that criteria.

For comparison, I have enclosed the structure of a true polyphenol with three phenyl groups. This specific polyphenol (a delphinidin) is found in blueberries, maqui berries, red wine, and black beans.

Unfortunately, most of the delphinidins and other polyphenols found in fruits and vegetables are in the form of polymers. As a result they are poorly absorbed into the blood. It is only chromatographically purified extracts of the maqui berry that you will find delphinidins as monomers. That is why the polyphenols found in purified maqui extract are highly bioavailable, just like the phenolic compounds found in extra virgin olive oil (4). If the active ingredients don’t get into the blood, they will not do you much good.

Getting back to extra virgin olive oil, what you are looking for is the levels of phenolic compounds, not the polyphenols. Most marketers of olive oils don’t have a clue what those levels are because they are challenging to analyze. We are currently doing 3rd party testing on the Zone Extra Virgin Olive Oil batch we just received from Italy and plan to post the results shortly.

Even though its hard to test these compounds, one easy way to know it's a quality oil and contains phenolics is the cough test. Take about one teaspoon of extra virgin olive oil and put it on the tip of your tongue. It should taste like melted butter. The lack of any bitter taste indicates low levels of free fatty acids. Then use your tongue to flip it to the back of your throat. If it contains high levels of phenolic compounds, you will get a coughing response. The greater number of coughs you get from this test, the higher the levels of phenolic compounds. This simple test is why Italians refer to a “two-cough” extra virgin olive oil as their standard of excellence, not the total levels of polyphenols. The Zone Labs Organic Extra Virgin Olive Oil is a “two-cough” oil.

The Next Evolution of Zone Protein: Understanding How Zone Foods Work

Protein is an essential nutrient for human nutrition. However, getting adequate protein in the diet hasn’t always been e...

I am still constantly asked the question “What is the Zone?”.  First, let me define the Zone once again.  It is the phys...

Carbohydrates are often villainized as the culprit for our weight gain, but it’s more complex than this.  It is constant...