Street food is defined as “Prepared or cooked food sold by vendors in a street or other public location for immediate
consumption”.

Sources agree that the oldest known evidence of food being cooked and sold in the streets dates back to Ancient Egypt when fish was fried and sold in the port of Alexandria. The practice then spread to Greece and later expanded throughout the Roman Empire. The remains of early street food kitchens where chickpea soups, bread, and grains were made have been found in excavations at Pompeii.

The items found on today’s street menus are a far cry from the fried fish of ancient times. Street food can now be had just about everywhere and is made in every way, shape, and form imaginable. Ever heard of fried Kool-Aid or the cheeseburgers with glazed donut buns made famous at state fairs?

There has been a street food revival in recent years leading to an explosion of food carts, stalls, and trucks. Last summer I made the rounds at the local food truck festival and was pleased to find there’s now something for everyone. It’s no longer the “one size fits all” junk food you might expect. The offerings sold by today’s vendors range from the outrageous to more trendy dishes for foodies’ sophisticated tastes.

As for the safety of street food, most states have the same requirements for brick and mortar restaurants as they do for food on wheels, including surprise inspections, once a year or more often. The vendor must also provide proof that any food not prepared on the truck was made in an inspected commercial kitchen.

You’re probably wondering how on earth you could ever possibly eat a Zone balanced meal from a food truck; it’s easier than you think.

Here are some tips and ideas. 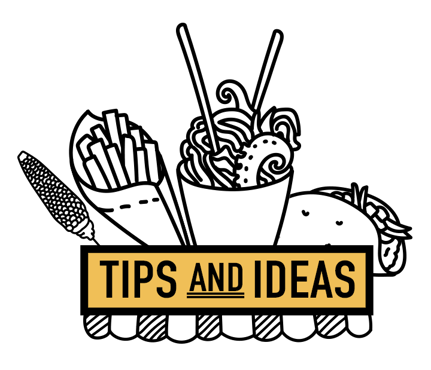 • PASS ON THE BREAD, RICE, PASTA, NOODLES, POTATOES, AND GRAIN BOWLS.
Just ask to have these left off your plate. Most vendors are happy to oblige.

• MIX DIFFERENT CUISINES.
Pick up some protein at one truck and some carbohydrates at another.

• CHOOSE COMBINATION PLATES WITH LOTS OF VEGETABLES.
Look for kebabs and dishes with a mixture of proteins with peppers, onions and, mushrooms. Sauerkraut is another good carbohydrate choice.

• IF YOU CAN’T FIND VEGGIES, CHOOSE GOOD ALTERNATIVES INSTEAD.
Such as lentil soups, falafel, or an ear of Mexican grilled corn. Careful with that last one. If the grilled corn is coated with cheese, chili powder and lime juice mixture, and it’s very addictive!

• SHARE THOSE GINORMOUS PORTIONS.
Especially when it comes to that decadent dessert or those giant turkey drumsticks you just can’t go without. While we’re on the topic, if you know you’re going to stray from the Zone one of the better ways to do it is to choose a low-fat protein, like garlic chicken skewers or steamed seafood (both are my favorites), and then have full-fat ice cream for dessert. Without getting too scientific here, the fat in the ice cream will slow down the entry of the carbohydrates into your bloodstream. This helps to ward off a huge blood sugar spike.

Now with the warmer weather here, go outside for lunch or check out the next food event near you. Be a bit adventurous and see what you can find. If you mess up and go overboard, no worries. You're entitled to it once in a while so hit the streets!

A Trio of Summer Garden Flavors

Summer’s here! The farmers’ markets and roadside stands are all open in New England where I live. Even the grocery store...

Getting A Strong Grip On Healthy Aging

Studies have shown a correlation between grip strength being a predictor of cardiovascular disease and overall longevity...

Adriana’s roots stem back to the Netherlands. During adulthood she worked as a journalist in Turkey and later traveled t...