Kristin Sears, the daughter of Dr. Barry Sears, shares Halloween tales from her childhood and Zone innovation secrets that led to Zone Chocolate Fudge bars. She also shares how her parent's clever tactics during her teenage years helped her grasp the concept of nutritious eating, as well as her own parenting tricks parents can leverage to ensure their kids eat properly. 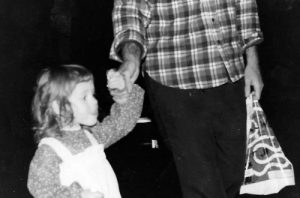 I still have a habit of hoarding and binging candy because of a traumatic childhood event. After coming home from neighborhood Trick Or Treating, my sister and I went to bed with dreams of snacking for weeks on our Halloween bounty. The next morning we awoke to a grisly scene—two empty pillowcases covered with discarded candy wrappers. The culprit? None other than your fearless nutritional leader and my dear old dad, Dr. Barry Sears!

According to him, he was saving us from all the unfavorable carbohydrates. I replied, “I am 10.”

This tale makes me think back to all the times growing up that I would encounter the pitfalls of growing up in the Zone. 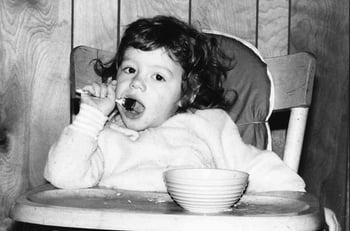 Over the years, my dad was honing his Zone philosophy. Meanwhile, I endured years of what he called “The Kristin Test.” At 11 years old, I was already a well-established picky eater. One year, I only ate Ellio’s pizza and fish sticks. The next year, it was only mac & cheese; then a year of only foods that were the color green. After potential products met my dad’s rigorous standards, he would then have me try them for “final” approval. If I liked the taste, it meant it was ready to sell at Zone. If I didn’t, it was back to the drawing board.

In the case of the first generation of Zone Bars some 15 years ago (back then called Bio Syn bars), kid testing did not go so well.

My poor mom would find melted, half eaten Bio Syn bars all over the house—under couch cushions and even in the toilet as a result of failed flushing attempts. In my defense, they tasted awful, like mixing sawdust with clay and melted into a hockey puck—but super nutritious! As poor tasting as the initial bars were, they were highly coveted by the Stanford Swim teams. With continued research, my dad learned how to reduce the protein hardening of the bars by adjusting the type the fiber content in them. It took him several years to discover the right combinations to maintain satiety coupled with taste. Thankfully, Zone Chocolate Fudge Bars taste a lot better today than those early iteration energy bars.

The Awkward Teen Coming of Age

I was 15 years old when my father’s first book, Enter the Zone, was published and became a New York Times best seller. Around then, my parents put the kibosh on giving me lunch money when they discovered I was using it to buy giant cookies and blue raspberry slushies. Since then, I’ve been eating nutritious packed lunches. But I still didn’t quite grasp the concept of nutritious eating. Imagine being a teen and having the following dialogue:

Dad: "Think of all those unfavorable carbohydrates in that slice of chocolate cake".

When I recently asked my dad for some advice on ensuring my son Lukas does not follow my picky, carb-filled eating blunders, he gave me (and now you) the following pearls of wisdom:

“Getting children at any age to eat correctly is difficult. In your case, when you went through your green phase (eating only green grapes and green apples), I would get you a cheeseburger, but only let you eat it if I replaced the bun with green grapes or a green apple. In other words, bargaining to get a better balance of protein to carbohydrate. Other tricks were to scrape all the contents off one slice of pizza on to another slice and then throw away the crust of that one slice without the toppings. These are tricks that hopefully stay with kids until they enter college. Today, having a constant supply of Zone pasta to make meals is a newer approach that I didn't have in the past.  However, the best approach is to start kids as early as possible (like age 6 months) to begin balancing protein to carbohydrate at the their meals to develop the reward circuits in the brain that good things happen when you balance protein, carbohydrates and fat.” 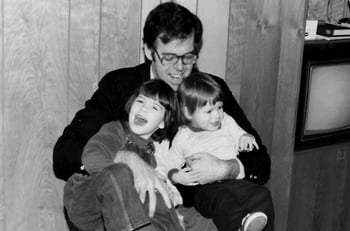 Clearly, I didn’t have the maturity as a child or teenager to understand the master class I was receiving from one of the world’s elite nutritionists. Looking back, I’m eternally grateful for the early Zone teachings. My father, Dr. Barry Sears, taught me how proper food balance can achieve optimal health. Even 20 years later, we both have a continued devotion to  following the Zone principles, and for me, I know if I keep my Halloween indulgence to a one-time event, I’m only one meal away from being back on track and in the Zone.

My hope is that I can pass these same life lessons on to my son. I’ve already started by making sure all his meals are Zone-friendly. And I’ve made the promise in the future to never eat all his Halloween candy.

Improve Your Nutrition Game at Daycare and Work

Get schooled on processed foods from Kristin Sears as she shares what to to know about nutritional labels, ingredient ...

Cameron Winchell was 19 years old when a Xanax overdose left him with brain injury and respiratory failure. It's been ...

How to Start Your Baby on Solids In The Zone

For many moms, the prospect of starting your baby on solids can be exciting and terrifying. Kristin Sears shares her h...