Have You Had Your Greens Today?

Kale, lettuce, mustard greens, Swiss chard, arugula, turnip greens, bok choy, spinach, collards, beet greens, watercress, parsley, dandelion, and the list goes on. Leafy greens are among the best of the best choices for the Zone Diet. They're rich in antioxidants, vitamins and minerals, and they're delicious! You've probably noticed the ever-expanding array of fresh, crisp, colorful leaves as you pass by them in the produce department. Maybe you've even purchased a generous bunch of Bright Lights Swiss chard and imagined these beautiful reds, greens, oranges and yellows on your dinner plate, only to discover them a week later languishing unused in the corner of your fridge because you didn't know what to do with them. If this sounds familiar, have no fear. Greens are one of easiest foods to prepare. Here are some tips and recipe ideas to make the most of these super-healthy vegetables.

Pre-washed mixed greens are a great way to perk up a salad. To make things even more interesting, combine them with one of the more exotic varieties like arugula or watercress or an herb, such as parsley. Arugula, watercress and parsley can also be added to cooked dishes and soups. 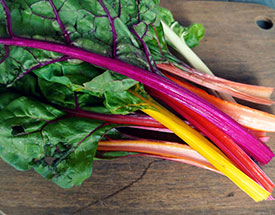 Include a handful of baby spinach leaves or kale in a smoothie or a chocolate Zone shake. Less is more when it comes to cooking greens. Take care not to overcook.

To preserve flavor and maintain a brighter green color during cooking, simmer greens in a little bit of water or broth in a deep covered skillet, instead of wilting them in oil or boiling them in a large pot of water.

Simmer a bag of mixed baby greens, such as spinach, kale and chard in some chicken broth for a quick veggie side dish.

A dash of vinegar plus a sprinkle of sea salt and some ground black pepper will bring out the flavor of spinach or beet greens. Add these seasonings after the greens are on the serving plate. Vinegar added during cooking can result in a brown tinge to the greens. 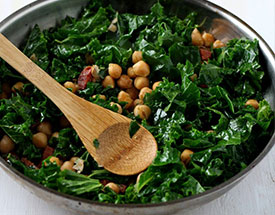 Make an easy dressing for drizzling over cooked greens by thinning almond butter with a little water and low-sodium soy sauce. This pairs well with mustard greens.

Cut collards into strips (approximately 1' by 3'). Saute some onion in a little olive oil, add the collards and water or broth. Simmer until collards are tender.