Elite athletes live in a world of constant inflammation by choice.  It comes from the intensity of the training needed to be the “best of the best”.  However, the inflammation caused by that intense training increases the amount of time needed for recovery so that they can go out and train again.

Perhaps no other event is as illustrative of the necessity of combining the intensity of competition with the need for rapid recovery as the Tour de France.  This endurance event consists of three weeks of high-intensity competition for hours that needs to be coupled with rapid recovery from that exercise-induced inflammation to begin the process over again almost daily for a three-week period.

Zone’s History with Slipstream Sports and the Tour de France

The 2017 Tour de France proudly marks the 10thanniversary of Zone Labs support of Slipstream Sports, competing under the name of the Cannondale-Drapac Pro Cycling team.

A little history is useful.  By 2006 professional cycling was a sport racked by doping using banned hormones.  These banned hormones were used not only to improve performance, but more importantly to enhance recovery.  In 2006 Slipstream Sports was started to demonstrate to the world of pro cycling that a team could perform at elite levels without the use of banned substances.  Just to prove the point, they tested their riders on a weekly basis for all to see.  In 2007, we were contacted by Dr. Matthew Rabin, their team physician, to see if Zone Labs could help reduce their riders’ inflammation due to training and simultaneously enhance their recovery times using foods, not drugs.

Our collaboration was truly a team approach.  Working with Slipstream doctors, nutritionists and chiropractors, we developed an anti-inflammatory dietary program for their riders based on the work that Dr. Sears had already done with dozens of Olympic Gold medalists starting at the 1992 Barcelona Olympic Games.  Although the Zone Diet was a key component, the real secret weapon was the use of high-dose fish oil to both reduce exercise-induced inflammation and to speed recovery. This also included constant testing of their blood to determine the optimal use of high-dose fish oil using our Cellular Inflammation test.

Incredibly, only five years after their founding, they won the Team title at the 2011 Tour de France.  As  Kevin Reichlin, their head team chiropractor and nutritionist stated, “The blood studies that Zone Labs did on our riders prior to the Tour de France were essential to dial in the exact amounts of fish oils as well as to make specific dietary recommendations for each rider. Dr. Sears and the people at Zone Labs were instrumental in helping us create the dietary modifications for each rider. We thank them hugely.” 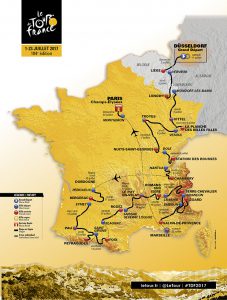 Even though the riders have changed, the medical teams have transitioned, and the team name has made some changes too, Slipstream Sports continues their commitment to the field of anti-inflammatory nutrition developed by Dr. Sears and especially the next generation of fish oil from Zone Labs, OmegaRx 2.

In a recent article penned by Johnathan Vaughters, president of Slipstream Sports in Business Insider, he made a statement that frankly, applies to everything we do with Slipstream.  “Learn to make collective and individual ambitions the same thing.”  He goes on to say “An individual, who is also a member of a team wins the race.”  Cycling is different in the sense that both the individual and the team win the race.  They run in parallel as the elite rider cannot win without the help of the domestiques (support riders). The riders reject their individual ambitions for the success of the team.

This statement applies to what goes on behind the scenes. Their health care professionals know that diet and high-dose fish oil are critical to obtain the best results.  At Zone Labs we continue to be very proud to be part of this total team approach.

If you want to travel to France to watch the Tour de France this year (a little expensive) or watch it on television (a lot less expensive) and wonder how the Slipstream riders continue to perform as a team under the most intense physical conditions, you will see how being in the Zone is their “secret weapon”

What About the Rest of Us?
You don’t have to be an elite athlete to get the same benefits from OmegaRx 2 as the Cannondale-Drapac Pro Cycling Team or other professional world champion teams that have won the World Series, the Super Bowl, or NBA titles in past several years using our fish oil products.

You can take your performance to the next level today by getting started with OmegaRx 2.

Make Your Own Zone Lunch Bowl

Power bowls, grain bowls, and lunch bowls are on menus everywhere, from fast food restaurants to the most upscale cafés....

Clinical Markers of the Zone Diet

Blood Markers of the Zone: How to Know if You are There The quickest way to gauge whether you are in the Zone is to eval...

The Clinical Benefits of PastaRx

We recently completed an exciting study looking at how the Zone Diet, using primarily Zone PastaRx compared to a traditi...