Are You Ready For Some Football? Your Brain Isn't

You put on your helmet when you step onto the field, but did you remember to take your fish oil? New insight shows fish oil can reverse inflammation caused by brain trauma.

Football season is here, and fans are breaking out their jerseys and following their fantasy football picks religiously. Even though National Traumatic Brain Injury Awareness Month falls in the beginning of the football season, the fans and NFL alike conveniently ignore the dangers of this sport.

For years, we’ve heard reports of the damaging effects football has had on players’ brains. Last year, there was even a Hollywood film released, Concussion, which put the debilitating effects of the sport into mainstream conversation. The film revealed the truth about brain damage in football players who suffer repeated concussions in the course of normal play.

But the latest movie, and numorous reports, only highlighted one thing we already knew: Traumatic brain injuries cause continuing neuro-inflammation. It's time to tackle this problem head-on. 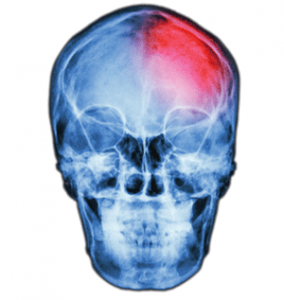 Over the past decade, there has been promising work to reverse traumatic brain injury conducted by Dr. Julian Bailes (a.k.a. the doctor portrayed by Alec Baldwin in the movie, Concussion) and my dad, Dr. Barry Sears.

Through animal and human case studies, both Dr. Bailes and Dr. Sears have learned that reversing inflammation caused by a traumatic brain injury can only be accomplished with adequate levels of EPA and DHA (two key omega-3 fatty acids found in fish oil), as well as the subsequent hormones, resolvins, made from EPA and DHA.

Reducing the neurological complications of traumatic brain injury is possible with enough EPA and DHA because they will reduce the ratio in the blood between arachidonic acid (an omega-6 fatty acid) and EPA to between 1.5 and 3. This relationship is referred to as the AA/EPA ratio.

Sadly, the AA/EPA ratio in the average American is about 20, and will be even higher in those with brain trauma. From these findings, Dr. Bailes (along with my dad) have concluded, “the supplemental use of fish oil during football season makes good sense.”

A Revolutionary Catch-all that Football Players Should Receive
Will the NFL and media catch on to this revolutionary protocol for treating traumatic brain injury? They could take a page from the Green Bay Packers’ playbook, the pro team that has been taking OmegaRx fish oil since 2010. Or perhaps Hollywood could release Concussion 2, where Dr. Sears can convey the impact of fish oil on brain trauma recovery. Dr. Sears has been on TV enough times that he could surely make the move to the silver screen. 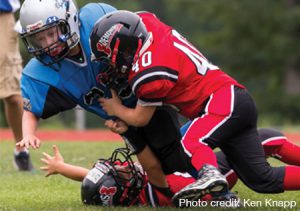 Yet, it’s not just players in the NFL who should be worried. Traumatic brain injury can occur as early as Pop Warner, the national youth football league played by kids as young as five years old. As a female who’s 5'4" on a good day, the urge to play football never appealed to me. But my son, Lukas, may be lured into playing. At nine months, he’s already towering over his baby pals, since clearly my 6'4" dad’s genes skipped a generation. As a parent, I’m extremely uncomfortable with permitting my son to play football knowing what I know about traumatic brain injury. How will he or any other kid accept being told ‘No,’ especially by two hypocritical parents who thoroughly enjoy watching football?

From Pop Warner to pro level, the only weapon for practically guaranteeing brain safety is to not play tackle football.

Get the Score on Youth Football

Here are some scary tidbits from 36 Shocking Youth Football Concussion Statistics, as originally printed by the Health Research Funding organization:

You wear a helmet to play football. Why not add internal armor? Get double protection, get on a fish oil regimen before you get hit. We recommend OmegaRx fish oil. Your brain will thank you.

The weather is heating up and with that, many are looking for quick fixes to flatten their bellies before hitting the be...

Rich Dalatri was the first full-time strength and conditioning coach in the NBA starting with New Jersey Nets in 1987. H...