How To Reverse the Health Effects of Sleep Deprivation

Without enough sleep, you’ll be left with impaired memory and cognitive process, weight gain, and decreased work performance and alertness. Kristin Sears shares the facts about sleep, and three tips to help you get the rest you need and deserve.

Since becoming a new parent, I’ve been humbled in many ways. Nothing has been more challenging than trying to get my child to sleep. There are message boards, sleep doctrines and Facebook groups devoted to helping get your kid some quality shuteye. With these groups, I’ve seen the dreaded infographic explaining how often my baby should be sleeping in order to enable proper brain development. It can be frustrating because my baby never seems to meet these minimum standards.

The more I’ve worked on getting my son proper sleep, the less I’ve focused on my own sleep deprivation. I’ve been a crummy sleeper as long as I can remember. I kept the lights on until I was 14 years old when my parents gave me insomnia cassette tapes to play. Nowadays, being sleep deprived because of a waking baby is one thing. But lying awake for no particular reason is as frustrating as it is exhausting. 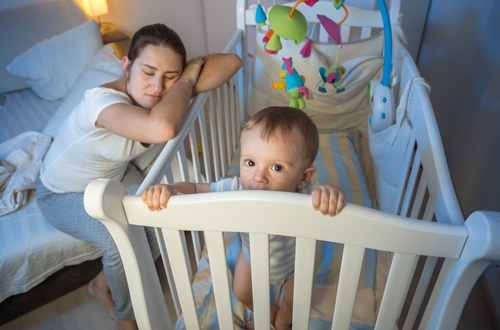 The Health Consequences of Being Sleep Deprived

According to my dad, Dr. Barry Sears, “The underlying cause of not being able to sleep is constant activation of the central nervous system by stimulants (coffee), stimuli (TV, email, computers, video games, etc), or stress. The hormonal results are increased insulin and cortisol levels that lead to weight gain and fatigue.”

If you can’t correct your troubled sleep habits, you’ll be left with some not-so-fun health effects.

So yeah, I definitely needed to cure my issues with sleep.

How to You Can Sleep in Heavenly Peace

Since I have a pretty elaborate bedtime wind down routine for my son, I figured I’d try one for myself to make me drowsy and hopefully lead me to a silent night. Here’s how I did it.

I began listening to my son’s “white noise” album called The Happiest Baby on the Block. It’s basically 6 distinctive tracks of soothing hair dryer tones. Believe it or not, it’s supposed to replicate sounds heard within the womb. I seem to have forgotten how wonderful it was in there (it’s been 30+ years), but womb acoustics have proven to be very pacifying.

Regardless of your age, getting your Zzz’s is imperative for a longer and more fulfilling life. Give these tips a try tonight when you hit the hay. And let us know if there are other tips that have helped you get the rest you need and deserve.